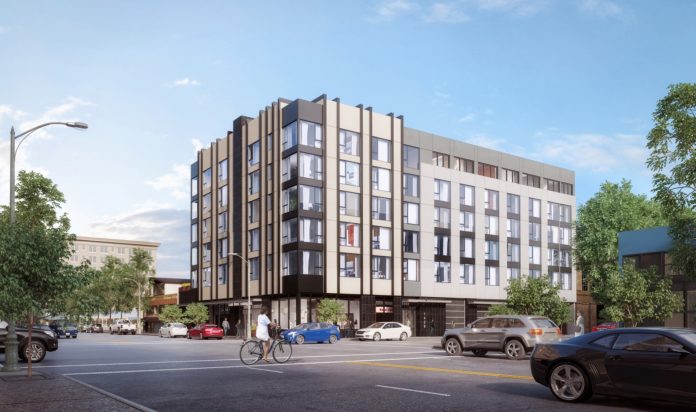 The site has a 98 Walk Score, 91 Bike Score and is located 4 blocks from BART and 3 blocks from Lake Merritt in the Lakeside District of Oakland. The team purchased the 19,000 SF lot in August 2017 with entitlements for a 126- unit high rise in-place. The project was re-entitled to approximately 95,000 square feet, including 79 residential apartments, 3,200 SF of commercial space.

“The Lakeside neighborhood in Oakland provides residents a peaceful sanctuary away from the hustle of Downtown, while being less than a 5 minute walk to BART, Lake Merritt and Oakland’s two commercial districts,” said Justin Osler, Principal and Project Manager at The Martin Group. “We’re excited to deliver new housing in Downtown’s strongest micro market.”

Amenities at Alice House will include a clubhouse, onsite fitness center, rooftop deck with free Wi-Fi, BBQs and fire pits that provide residents sweeping view of Downtown Oakland. The project consists of 60% Studios/1 Bedrooms and 40% 2 Bedrooms/3 Bedrooms, making it one of the few residential projects to deliver new 3-bedroom units.

About The Martin Group

The Martin Group was founded in 1984 by its current Chairman, David Martin, and has developed or redeveloped over 24 million square feet of real estate and 20,000 residential units since its founding. In addition to its Oakland projects, The Martin Group has current developments in Berkeley and Southern California.

Terra Capital Partners is a New York City based real estate credit focused asset manager that invests across property types, markets and securities. The firm has deployed $2 billion of capital and has built a strong track record over its history. Currently, Terra has approximately $500 million of discretionary capital under management.