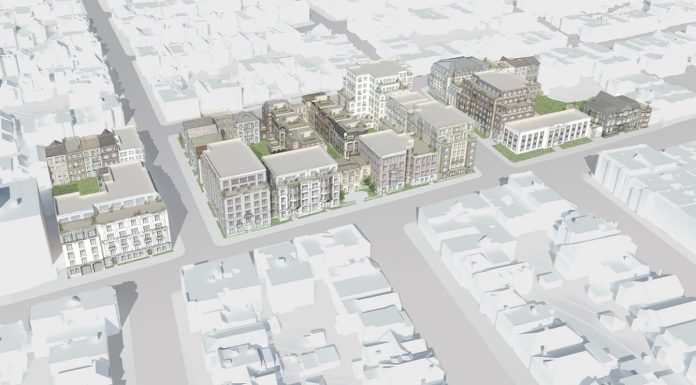 A Presidio Heights site occupied by the California Pacific Medical Center and entitled for the development of a total of 273 residential units traded hands for an amount in the low $50 million range, according to sources with knowledge of the transaction. The seller was Sutter Health, which put the property on the market earlier this year. The buyer was The Prado Group.

The site is located at 3700 California St. and covers a total of 4.9 acres spread across three city blocks that sit within the Presidio Heights neighborhood of San Francisco. The residential development that the site is entitled for was approved to have a total of 19 new multifamily buildings, 14 new single family homes and nine existing rental units, according to previous reporting from The Registry. The types of planned housing include a mixture of one, two-, three- and four-bedroom flats, studios, two-story row houses and three- and four-bedroom maisonettes. The project also has open and shared amenity spaces.

The Prado Group is based in San Francisco and is a real estate investment and development company with a primary focus on urban residential, retail, office and mixed-use properties, according to the firm’s website. The company is dedicated to acquiring, entitling, developing, repositioning and operating properties “to enhance thriving communities and economies.”

Earlier this year, The Prado Group purchased a Union Square retail property for $26 million, or roughly $2,311 per square foot, according to The Registry’s previous reporting. The seller of the property was a San Francisco Bay Area-based family trust, which was represented in the transaction by the CBRE Capital Markets Team based in San Francisco.

That property is located at 166 Grant and is an 11,246 square foot retail property that is fully leased to Giorgio Armani. The lease runs until 2030 and has 3.5 percent annual increases. The retail property has three stories plus a mezzanine and lower level. It was first constructed in 1908 and was most recently renovated in 2016.