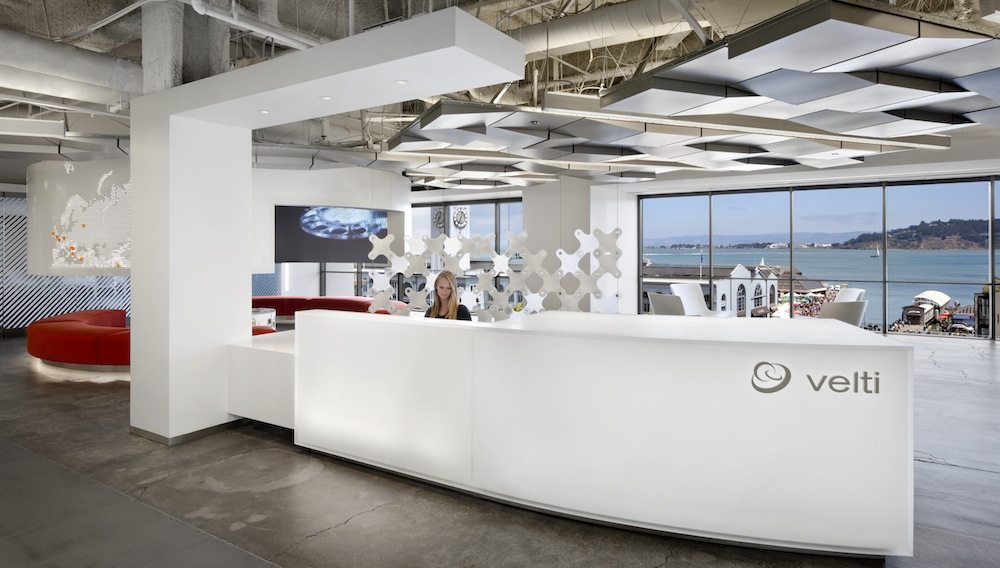 The reception desk, amphitheater and a Mobile Museum kiosk, installed to better connect clients and prospects to Velti’s services, are the only permanent structures in the entryway. Coupled with unfinished concrete floors and geometric metal panels covering a mostly exposed ceiling, the 3,500-square-foot space is a blank canvas on which the mobile marketing and advertising technology firm can stage client and investor meetings, company events, breakout sessions, solo-work, mingling and all-hands meetings. Movable ottomans, chairs and tables in Velti blue, orange and white are arranged throughout. Even the site’s main conference room, on one end of the entrance area, is enclosed with retractable glass panels.

“We wanted to let the light and view in, so everyone can participate. Visitors and employees,” said Eric Marvin, Velti’s vice president of administration, who managed the project’s creation. The prior tenant, a law firm, built private offices along the window, blocking the view from the rest of the office. “We thought, ‘Let’s make this space for everyone,’” Marvin said.

The flexible, welcoming entrance drove the improvement’s construction cost to $3 million—expensive for a technology company, said James Jenkins, president of San Francisco’s GCI General Contractors, who managed the project; however, it sets the tone for the rest of the 40,000-square-foot space in Steuart Tower at One Market Street: Extending an embrace to Velti investors, clients, employees and prospects while capturing the company’s cultural essence of transparency and employee engagement.

Until May 2012, the firm, founded in Greece in 2000 and technically headquartered in Ireland, did not have a large client-facing space in San Francisco. “We were essentially a start-up that had pretty much hunkered down where we could find a place to work,” said Marvin.

The 150 San Francisco-based employees had outgrown the space at 150 California St., which was about a third the size of the new location and clogged with private offices. “There were times when you’d see 20 people wandering around with their laptops looking for a place to sit down and work,” Marvin said. “It was chaotic.” The employees were deeply engaged in the design of the new offices.

Velti derives the overwhelming bulk of its revenue by selling software as a service. In the first nine months of 2012 it accounted for $144.3 million of the total revenue of $172.9 million, according to its most recent financial report. Its products allow advertising agencies, mobile operators, media companies and brand owners to use traditional media and mobile media to target and engage consumers.

Marvin and Michelle Ives Ratkovich, principal interior design director for the Western United States at AECOM, which was commissioned to spearhead the design, partnered with members of AECOM’s Strategy Plus division in August 2011 to conduct a “deep-dive analysis” of the way Velti employees work and how they want to work in the future. “Velti is a relatively young company, so much of what we were doing was helping them develop their culture as well,” she said. 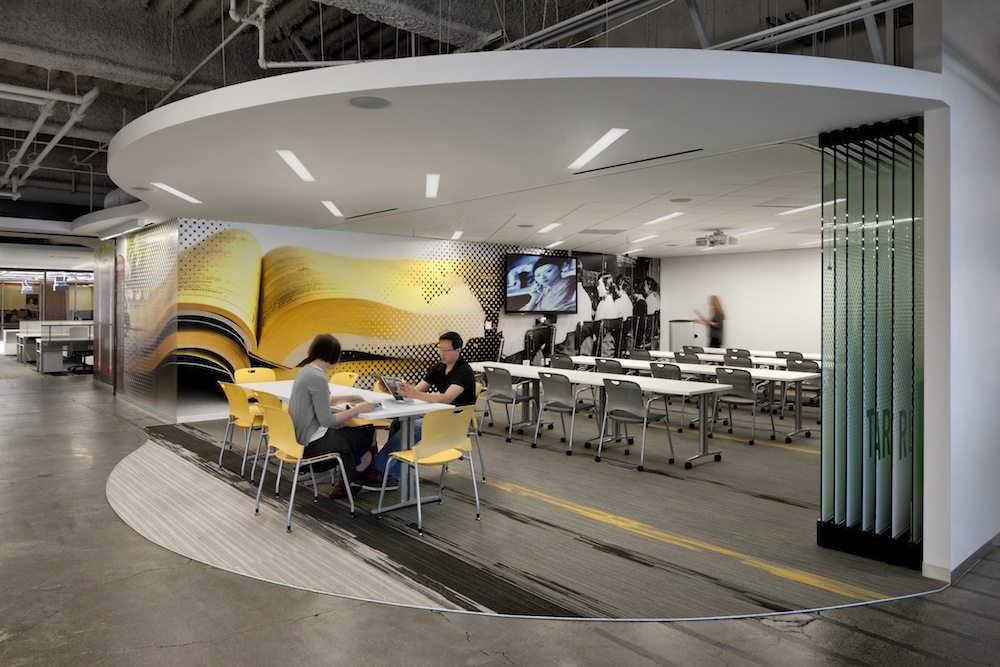