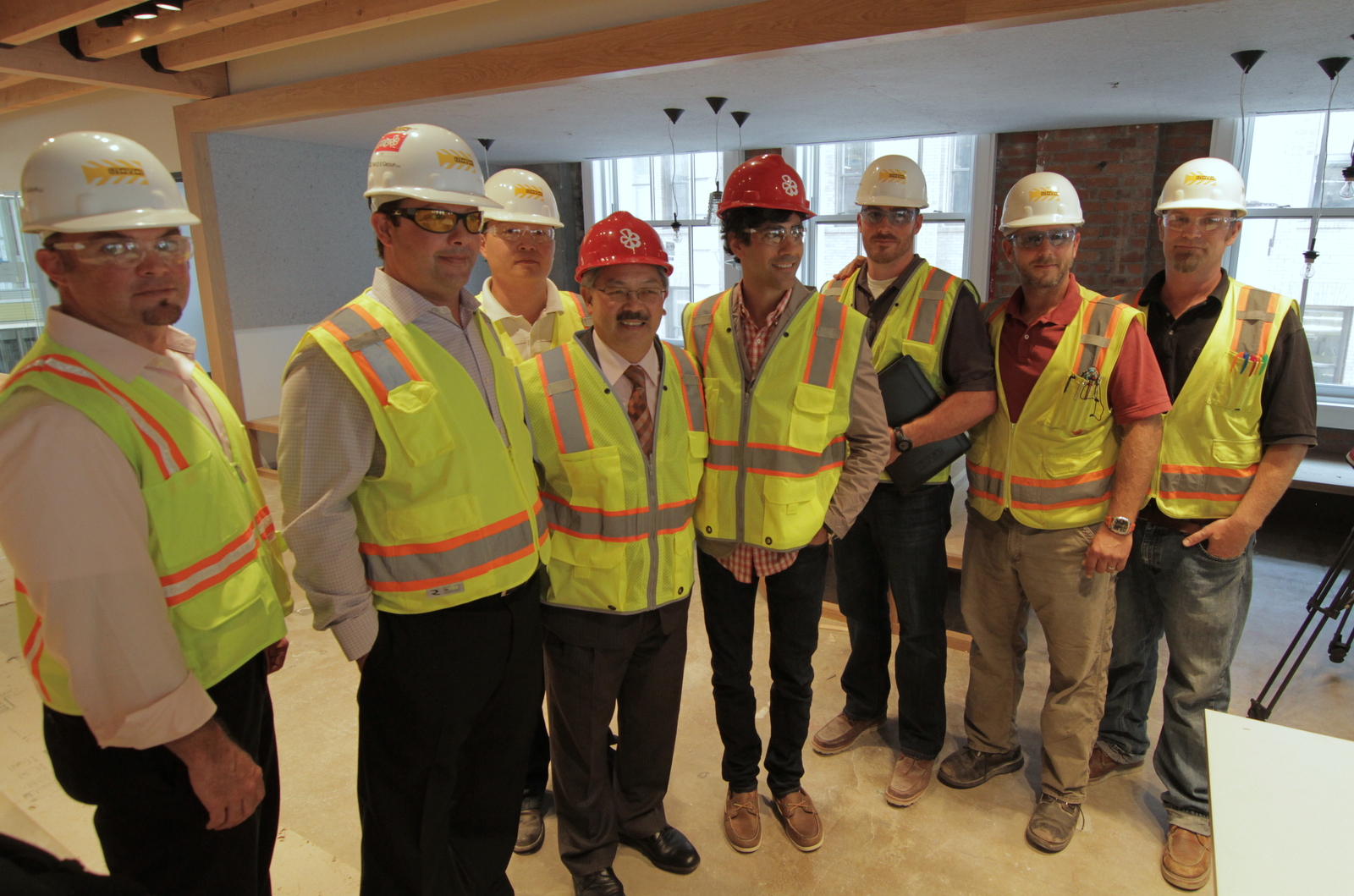 It is the second expansion for the historic building’s anchor tenant and would bring its total occupancy to nearly 150,000 square feet on a dozen floors.

San Francisco-born and -based Yelp, founded in 2004, expects to begin moving 700 employees to its new corporate headquarters at the close of the month. The company is vacating its current offices at 706 Mission St.

Yelp said in mid-2011 that it had signed an eight-year lease for nine floors at 140 New Montgomery. Managers hope to complete the move into the former Pacific Telephone & Telegraph Co. building in stages over the following two weekends, said Yelp Head of Facilities John Lieu.

“I haven’t been in here since it was Pac Bell,” the mayor told Chris Meany and Stoppelman upon his arrival.

“These guys [Yelp] have brought it up to an incredible standard,” Meany said.

“There are a lot of hot companies out there,” Stoppelman said. “You’ve got to differentiate. There is tons of bike parking below. We have a lot of bikers at Yelp.”

The building has 200 bike spaces and 20 parking stalls, according to Wilson Meany.

The landlord granted Yelp a tenant-improvement allowance of $5.8 million, or $60 a foot, when it leased the first nine floors.

San Francisco’s attraction to strong talent keeps Yelp in the city, Stoppelman said. But the company chose 140 New Montgomery as its new headquarters because of its link to the city’s past. “[The building] is really beautiful from the outside, and it has an historic connection to the city that some of these other buildings don’t have,” he said.

As one gesture to the building’s former occupants, Yelp saved and salvaged the building’s interior doors with dark wood framing and a center of opaque glass. “The stenciling is still there. It’s a real connection to the past,” he said.

Wilson Meany and Stockbridge Real Estate Funds acquired 140 New Montgomery in 2007 in a joint venture. They originally thought to turn it into housing. Yelp is the first major tenant to occupy since AT&T left, Meany said.

The building’s floor plates are approximately 12,000 square feet each, growing smaller on the upper floors.

In total, Yelp has just more than 1,500 employees, about half of them salespeople, and expects to continue hiring, the chief executive told analysts on the company’s July 31 conference call, according to a transcript prepared by SeekingAlpha.com.

Originally built in 1926, the structure is undergoing full renovation including seismic retrofitting, the modernization of all building systems with an emphasis on sustainability, a consolidated building core, and rehabilitation and modernization of the lobby. “It’s all brand new; it’s all state-of-the-art,” Meany said.

Yelp’s space will be occupied at a density of 115 square feet to 120 square feet per worker, Lieu said. Outside of the human resources department, it has no private offices, said Sean Yudice, the Novo project executive for Yelp.

When the space is finished, the floors are to be polished concrete in the heavily trafficked passages with carpeting for work areas; the ceilings are largely open, creating an industrial aesthetic. Employees can work at open bench seating, in a collection of small private conference rooms on each floor, or meet or eat in collaborative break areas on each floor that measure about 500 square feet apiece. Wood, glass and ornamental steel are integrated, Yudice said: “It is a very open environment, very creative.”

The space has a single “warming kitchen” on the eighth floor where Yelp can bring in catered meals for workers. But by and large, Yelp employees prefer to eat out, Stoppelman said—the better to see for themselves the restaurants and other businesses that so many visitors write about for the Yelp Web site.