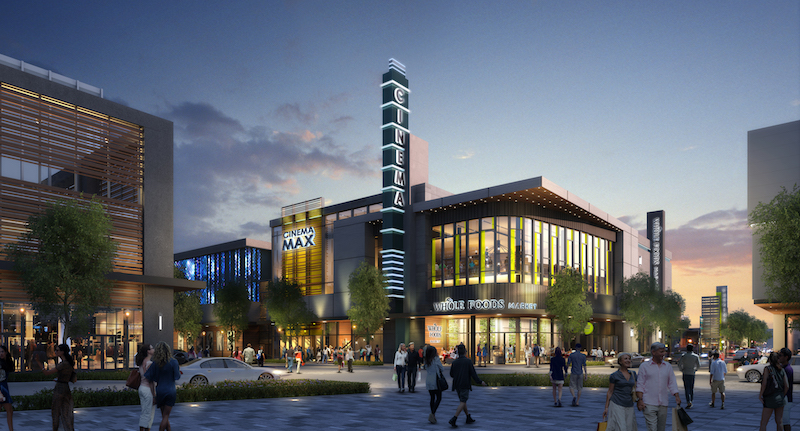 Requested Amendment Would Include a Mix of Residential, Office, and Retail Spaces to Create a Walkable Downtown Neighborhood

SUNNYVALE, CA – JULY 17, 2017 – STC Venture, LLC, a joint venture between affiliates of Hunter Storm, Sares Regis Group of Northern California, has requested that the City of Sunnyvale initiate an amendment to the Downtown Specific Plan (DSP) to allow for new residential, office, and retail uses on the undeveloped portions of 36 acres in the heart of downtown. If amended, the revised DSP will lead to implementation of the City’s and the developer’s vision to create a walkable neighborhood that promotes biking and transit. In addition to the work already underway, the plan will provide residents and visitors with a unique gathering place and exciting options for shopping and entertainment.

The multi-phase project also includes the planned and approved construction of a new, two-story building on the corner of Murphy and McKinley Avenues with an already entitled Whole Foods Market on street level and a multiplex movie theater planned for the second floor. The 52,000-square-foot grocery store and 50,000-square-foot theater will anchor the downtown district will attract desirable retail and restaurant tenants to the area. The market and theater project is scheduled to break ground later this year, and will open early 2019.

“Our vision for the redevelopment of downtown Sunnyvale will fulfill the community’s desire to have a dynamic gathering place for living, dining, shopping, and entertainment that is walkable and transit-oriented,” says Deanna J. Santana, City Manager for the City of Sunnyvale. “I commend the hard work by City staff and the STC Venture team, and look forward to our continued partnership toward achieving a downtown our community deserves.”

Renamed “CityLine Sunnyvale,” the proposed development will contribute to the long-term revitalization of the central business district for the benefit of residents and businesses alike.

As proposed, the DSP Amendment would include the addition of a maximum of both 400,000 square feet of office space and up to 500 residential units located above ground-floor retail along McKinley Avenue and a newly extended Murphy Avenue. The residential community would surround a new active public plaza, bounded by diverse retail which will enhance and support a vibrant downtown Sunnyvale. The plaza will incorporate the existing heritage redwood trees, green spaces, picnic areas, play areas, and seating which can flexibly be used for both private and public functions. As proposed, the plaza will be a community gathering point for residents, workers, and visitors.

“Our vision for the future of downtown Sunnyvale is to add a robust mixture of housing, office, and retail space that will bring greater prosperity and success to both new and existing businesses,” says Dave Hopkins, Senior Vice President of Sares Regis Group of Northern California. “We see this highly desirable area as a local and regional destination, and with the encouragement of Whole Foods and the multiplex theater tenant, this vision will build the foundation to develop CityLine Sunnyvale into an energized, walkable, and economically vibrant neighborhood that will both attract visitors and provide immediate benefits to those who work and live downtown.”

“Our vision for the future of downtown Sunnyvale is to add a robust mixture of housing, office, and retail space that will bring greater prosperity and success to both new and existing businesses,” says Dave Hopkins, Senior Vice President of Sares Regis Group of Northern California. “We see this highly desirable area as a local and regional destination, and with the encouragement of Whole Foods and the multiplex theater tenant, this vision will build the foundation to develop CityLine Sunnyvale into an energized, walkable, and economically vibrant neighborhood that will both attract visitors and provide immediate benefits to those who work and live downtown.”

The decision to rename the project as CityLine Sunnyvale was based on the concept that this area will “connect the dots” between work, life, entertainment, and leisure, with adjacent access to Caltrain. With residential, office, and retail space all in one convenient location, CityLine Sunnyvale will blend the boundaries between working and living in Sunnyvale.

“From the beginning of this project we could see the unlimited potential of this area to bring the community together,” says Deke Hunter, President of Hunter Storm. “In addition to new housing and commercial space, connecting Murphy Avenue with McKinley Avenue and adding a Whole Foods Market and a multiplex theater as a focal point will go a long way towards revitalizing this long-dormant site and transforming it into a bustling hub of commerce.”

CityLine was acquired by STC Venture in late 2015. Phase one of construction is currently underway in the 36-acre, mixed-use project. It includes plans to complete 198 one-, two-, and three-bedroom homes with indoor and outdoor amenities—including 24 affordable homes—along Taaffe Street, as well as 85,000 square feet of retail space in mid-2018. In addition, STC Venture LLC has submitted conceptual plans for an additional 94 residential units along Iowa Street, the entitlements for which were approved in 2007. These include 75 one- and two-bedroom homes and 19 three-bedroom townhomes.

Twenty million dollars of public improvements are currently in the works for CityLine Sunnyvale, including the temporary reopening of Redwood Square for public use this fall, the extension of Murphy Avenue to connect with McKinley Avenue, the addition of landscaping and street trees, the installation of new traffic signals, and the construction of landscaped medians. Target and Macy’s department stores continue to serve CityLine Sunnyvale, with parking for customers located in two existing garage structures and a surface lot.

About Hunter Storm
Hunter Storm, the development arm of Hunter Properties, is a commercial real estate development firm with an emphasis on ground-up construction, repositioning of assets, and value-add improvements. Hunter Properties was founded in 1960 and the current partners, Deke Hunter and Edward Storm formed Hunter Storm in 1986, with Curtis Leigh joining the team in 2004. The company enjoys a strong track record by focusing its efforts locally with all major projects located in the San Francisco Bay Area. This allows the principals to leverage their market knowledge and expertise evenly across three product disciplines.

Recent award-winning projects include Crossing 900 in downtown Redwood City, @First in San Jose which is a mixed-use project of over 1 million square feet, Bass Pro at Almaden Ranch and Village Oaks in South San Jose. Current developments include Coleman

Highline a transit-oriented development of over 1.5 million square feet across from San Jose International Airport.

About Sares Regis Group of Northern California
Sares Regis Group of Northern California and its affiliates, Regis Homes Bay Area and Regis Contractors Bay Area, are regional companies based in San Mateo, California. As leading developers and managers of commercial and residential real estate in the western United States, the companies have more than 6.5 million square feet of commercial properties valued at $500 million and over 2,800 residential units under development. Since its inception, the company has acquired or developed approximately 46 million square feet of commercial properties and 20,000 multifamily and residential housing units. For more information, please visit: www.SRGNC.com.