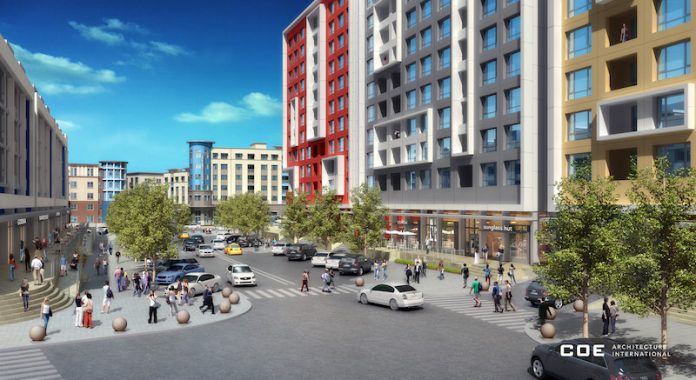 A previously stalled mixed-use, luxury housing project in Milpitas has launched its first phase and is looking to build momentum toward subsequent development phases.

A groundbreaking ceremony for The District’s first phase was scheduled for Wednesday, marking the start of construction of 371 luxury rental units, 45,000 square feet of retail space and a 30,000-square-foot high-end grocery store across from the Great Mall shopping center.

“Last night was obviously a very big night for Lyon Living and for the city. We’re very excited!” Lyon CEO Frank Suryan Jr. said during the groundbreaking ceremonies. “We’re not going to phase this. We’re starting construction here. We’ve hired Humphreys & Partners Architects, they’re in the middle of doing drawings on this building, and then we’ve selected another architect, so we’re going to be processing these as quickly as architects can go and the city can keep up with processing.”

The good fortune of the times in which we are today will not last forever, and Suryan seemed well aware of that critical variable. “We’re going to go full speed ahead and take advantage of current market conditions,” he added.

“Obviously, the tech market is booming, and the job market is very, very strong in Silicon Valley,” Suryan said. “There is a shortage of this kind of lifestyle residential community. It’s ideally situated—close to high-tech companies, the airport, the new BART station (scheduled to open in 2017) and the Great Mall. The location is A-plus.”

Lyon officials also pointed out that the project would include dining, fitness and other amenities atop the residential units.

“This one is going to be an entertainment/residential community,” Suryan said. “We think we’re creating a new lifestyle.”

Lyon Senior Vice President Peter Zak said The District would be completely built out over three to four years and cost up to about $700 million.

For a time, the project stalled when its previous developer—Integral Communities, also based in Newport Beach—asked for what the city believed would have been fundamental changes to plans approved years before. Integral ultimately decided to withdraw the project from city consideration.

But Lyon acquired The District site from Integral and revived the initiative.

Milpitas Interim Planning Director Bill Ekern said the city staff’s recommendation to the council Tuesday was to grant zone-change, site-development and other approvals that would allow the project to proceed.

“We think all in all it’s a good project,” Ekern said. “It’s a big project, but it’s a real good opportunity and a good developer to build it. It will definitely meet the demand in the market. It has a different residential mix of apartments and for-sale units and a hotel. It has a range of different sizes and densities.”

He added that because the project’s retail component would feature small, neighborhood-style shops it would complement—not compete—with the larger stores at the Great Mall. On the retail end, Lyon has hired the Lockehouse Retail Group to lead the leasing of the four-phase development that will total nearly 150,000 square feet of retail once completed. The team led by Josh Amoroso and supported by Kyle Goni and Jon Woodcox is in the process of negotiating a grocery tenant that will anchor the initial phase of the development. “We have two prime, top notch markets that are competing against each other for the market,” said Suryan.

“We have received several offers and are in the process of vetting each opportunity. We are listening to the needs and wants of the community to deliver on a grocer that will provide quality items with an emphasis on natural and organic,” added Amoroso.

“The Great Mall is a dominant regional player that casts a large net pulling shoppers from 15+ miles in each direction. The District was designed with the emphasis on catering to a more regional audience and providing higher-end retail opportunities, which are currently void of the market,” said Amoroso, adding that they are targeting natural organic grocery store with a focus on the urban feel due to the 7,500 multifamily units being built within walking distance of the project.

The various uses will also include modern amenities and a hotel. “We’re in discussions with a couple of high-end hotels, AC Marriott, one of them, Virgin Hotels, so we’re going to get a high-end hotel operator to complement the supermarket. We have some other retailers that we’ll be coming to the city with,” concluded Suryan.