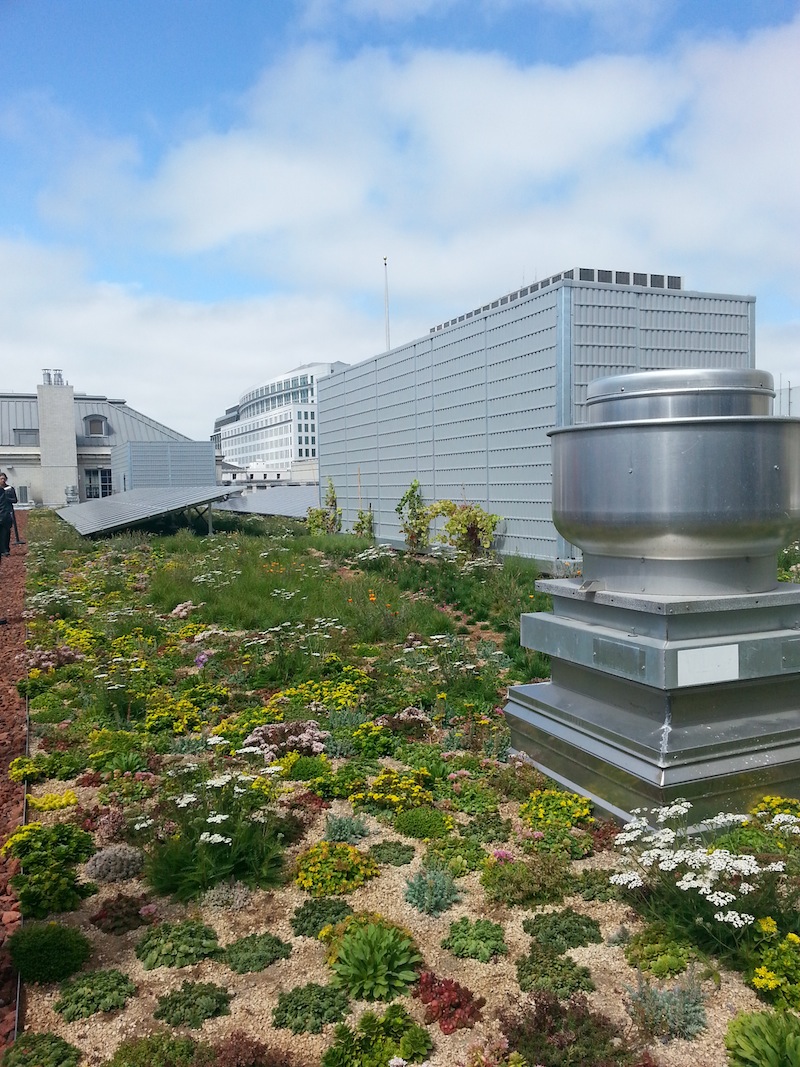 San Francisco likes to think of itself as a pioneer in progressive social and political missions to change American society and the world.

[contextly_sidebar id=”cb9fe537bc182897413f376be99ff3b9″]But—horrors—evidence is insurmountable that the city is behind in one of the sustainability movement’s current champions: green roofs.

With the unveiling Aug. 21 of the city’s newest green roof at 50 U.N. Plaza, an historic federal building, and the 11th Annual Green Roof & Wall Conference set for the city in October, that oversight is coming to the fore.

For a city like San Francisco, with generally temperate weather, the roofs would function as a heat brake and absorber. But more importantly, they are being seen as an adjunct to a storm water and wastewater system that is overwhelmed in severe rainstorms, sending untreated waste into the San Francisco Bay.

The city has already embarked on a 20-year, $400 million “green infrastructure” and watershed improvement plan for its storm and waste water system. Instead of more pipes, it is spending money to make existing hard surfaces more porous.

The goal is to divert rainwater from the storm system entirely by allowing it to seep directly into the ground. The green infrastructure is being double purposed to spruce up neighborhoods with such things as rain gardens, permeable and decorative paving, or tiny street-side “bulb-outs” with plants and small gardens.

San Francisco Planning Director John Rahaim said Aug. 21 that the city is looking more seriously at green roofs: “I think it is something we can encourage and outright require. We have slowly ramped up [the environmental stringency] of our code. I would not think this would be unusual as the next step on a policy and regulatory framework.”

“There is already a going discussion on how we can put regulatory incentives and policies in place to move it forward,” he said.

In 2012, Washington, D.C., led the country with more than 1.2 million square feet of newly installed green roofs, according to Peck’s organization. Chicago was next in line with 600,000 square feet, and New York City ranked third with not quite 400,000 square feet. No Bay Area city appears on the Top 10 list.

While the new 14,000-square-foot green roof at 50 U.N. Plaza features wildflowers, vines and meadow plants such as California honeysuckle, bluff lettuce, Idaho fescue and white yarrow, Peck notes that history and human imagination illustrate that there are many other uses including food cultivation and creating and preserving biodiversity.

Fifteen percent to 20 percent of the land area in U.S. and Canadian cities is on rooftops, Peck said. Manhattan has 30 percent of its land area at the top of buildings.

That roof space represents missed opportunity to clean air and water and to create green refuge in the city.

More broadly, buildings that can produce their own energy using technologies such as onsite solar panels and create their own drinking water by capturing rain and purifying it on site make a city more resilient after major weather or other natural disasters because they don’t depend on the public infrastructure, he said.

The federal government spent $122 million renovating 50 U.N. Plaza, which has not quite 350,000 square feet and five floors. This is the building’s first major upgrade since it was built in 1936. The GSA expects to occupy four floors as its Western region headquarters beginning in October. The fifth floor with 22,000 square feet will be offered for lease, first to other federal agencies then at large.