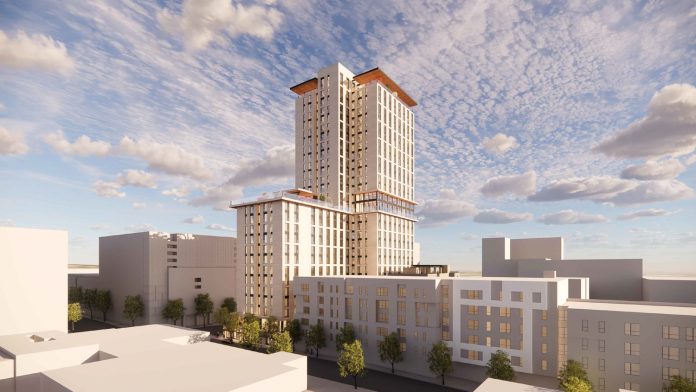 Berkeley-based NX Ventures is planning the tallest-ever apartment project in its hometown. According to a proposal submitted to the City of Berkeley, the developer has submitted new plans for its future project at 1998 Shattuck Avenue. No development cost on the building was available at this time, and it’s unclear when the project will be started or potentially completed.

The development would have a total of 28 stories. At this height, the building would be 317 feet high, exceeding the 307-foot Sather Tower, also known as The Campanile, the iconic and recognizable tower located at the University of California Berkeley campus, as the City’s tallest structure. The new plan calls for a total of 599 apartments, which doubles the number of units the project was previously considering.

The planned new development proposes the construction of 412,400 square feet; the housing portion would be 396,030 square feet. The project plans to utilize the State Density Bonus program, exceeding the base zoning by 50 percent. Of the 599 units, 60 will be allocated as affordable housing units for tenants earning less than half of the Area’s Median Income.

The commercial portion of the development will be 16,370 square feet. This space will be split between the ground level and the project’s rooftop. There are plans for five retail spaces extending the project from University Avenue to Shattuck Avenue. The flexible retail space could allow as many as ten retail tenants to become part of the project.

One of the main amenities for the potential project is a rooftop restaurant, which would give the residents a tower with panoramic views across the East Bay. This could be a destination place to bring people from all over the East Bay to the restaurant. Basement parking will be included for restaurant customers and staff. The current parking plans allow for 154 cars and 256 bicycles. There could be additional parking added to meet future tenant and retail needs.

NX Ventures is also exploring opening up the amenities at 1998 Shattuck to residents of other NX Venture projects across Berkeley. This would be accomplished through a club-accessible space program for the residents.

The project development team includes Berkeley-based Trachtenberg Architects as the architect of record. The design plans are looking to wrap the building with an off-white metal cladding with floor-to-ceiling windows. The covered outdoor decks will create focal points on the 14th floor and the rooftop. The retail will be wrapped along the base with double-height curtain wall glass.

The site of the new development puts it only one block away from the downtown Berkeley BART Station and one block from the UC Berkeley campus. It is projected that the main renter audience for the project will be young professionals who work in the region.