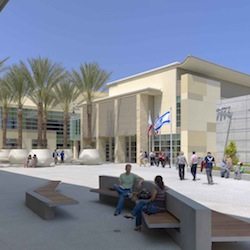 PALO ALTO, CA – The Phoenix Awards Executive Committee announced on May 1st that the Taube Koret Campus for Jewish Life (TKCJL) is the recipient of the 2011 Phoenix Award for the U.S. Environmental Protection Agency’s Region 9.

The Phoenix Awards were created in 1997 to recognize individuals and groups who are working together to solve the critical environmental problem of how to revitalize used, industrial properties into sites appropriate for new and productive uses.

Developed by Sares Regis Group of Northern California for the Jewish Home of San Francisco and the Oshman Family Jewish Community Center, the TKCJL project was a collaborative initiative to strengthen and enhance Jewish community life on the South Peninsula by developing a multi-purpose, intergenerational Jewish campus, which is also open to the entire community.  The $270 million, 13-acre TKCJL project was meticulously master-planned by Steinberg Architects with disparate amenities integrated by design into a sophisticated whole.  Construction of the highly complex, mixed-use campus began in 2007 after two and a half years of engagement with the Palo Alto community via public hearings.  The vibrant, pedestrian-friendly campus includes both a community center and an assisted living facility with more than 190 senior rental units prominently integrated into the campus’s layout, and offers educational opportunities and cultural experiences, as well as recreational and fitness activities.

Prior to construction, Sares Regis led the clean up of the building site at 3921 Fabian Way in Palo Alto.  Pollutants left in the soil by previous occupants included benzene, toluene, ethylbenzene, and xylenes.  Sares Regis employed state-of-the-art technology, techniques, and experts to remove these dangerous chemicals, and the land beneath the structures was returned to an environmentally safe state.

“We’re honored to join the ranks of Phoenix Award winners,” said Jeff Birdwell, President of Commercial Development with Sares Regis Group of Northern California.  “Sares Regis takes sustainable development very seriously, and we’re proud of what we were able to accomplish in terms of brownfield redevelopment with the Taube Koret property.”

About Sares Regis Group of Northern California
Sares Regis Group of Northern California and its affiliates, Regis Homes Bay Area and Regis Contractors Bay Area, are regional companies based in San Mateo, California.  As leading developers and managers of commercial and residential real estate in the western United States, the companies have more than 6.5 million square feet of commercial properties valued at $500 million and over 2,800 residential units under development.   Since its inception, the company has acquired or developed approximately 46 million square feet of commercial properties and 20,000 multifamily and residential housing units.

The Northern California companies are also affiliated with Irvine-based  SARES·REGIS Group , and together they have a combined portfolio of property and fee-based assets under management valued at more than $4 billion, including 13,000 rental apartments and 15 million square feet of commercial and industrial space.  For more information, please visit: www.SRGNC.com.