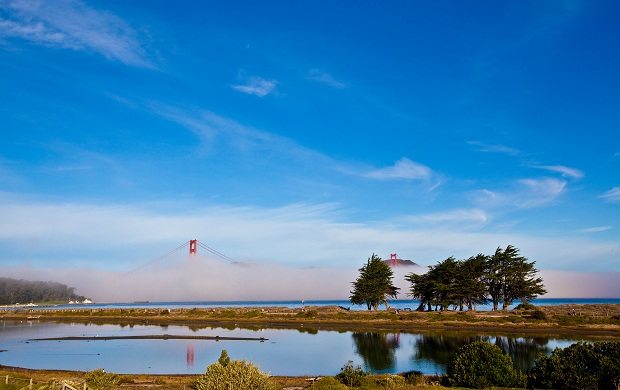 The Presidio of San Francisco is a unique location not only because it is a large nature conservancy in the middle of a major urban center of our nation, but also because of its history. It has been host to camp grounds and military barracks but started as a marsh used for hunting. Now, the Presidio Trust, a federal agency created with the mission to preserve the national park and lead its transformation for a new national purpose, is looking to add a cultural center that is undeniably San Francisco.

On September 23rd, the Presidio Trust held a public meeting to discuss the proposals for the Mid-Crissy Field Project, an initiative to build a cultural center alongside Crissy Field. Each proposal was distinct to itself but they all had to follow certain requirements put forth by the Presidio Trust, including being compatible with nature and adding to the cultural backdrop of the city. In late 2012, the Presidio Trust asked for proposals and by March it had received sixteen. On October 24th, there will be another meeting to allow for public comment before the Presidio Trust Board of Directors makes a decision on the direction; no date has been set for when the final announcement will be made.

The final three proposals, consisting of The Lucas Cultural Art Museum, The Bridge/Sustainability Institute and the Presidio Exchange, presented their ideas in front of a packed house. “The goal set before them was not simple,” said Dr. Brent Glass who was working as the Master of Ceremonies at the meeting. “[The finalists] were asked to define the identity of the Presidio.”

Easy or not, each team managed to do it and each in a different way. The Lucas Cultural Art Museum, designed by the Urban Design Group, aimed for the wider world of art and creativity in San Francisco, a museum dedicated to the art of illustrations, cartoons and movie making.

“I grew up in Modesto,” said George Lucas who personally presented his proposal. “Generally, San Francisco was the cultural center of my life.” A more interactive museum, The Lucas Cultural Art Museum plans to have a wing dedicated to the digital work of animation and filmmaking as well as using the space available to bring in exhibits that can’t fit in conventionally built museums. “This will help redefine what museums are for the 21st century,” said Laela French, the Exhibits Director of Lucas Arts. “Museums are education.”

The presenters of this proposal discussed reaching out to underfunded schools and using the museum as a way to teach both children and aspiring filmmakers. Their proposal also focused on the environmental and historical side of the plan to keep and preserve the clusters of historic buildings and studying the traffic, both natural and manmade, in the area so that nothing will be disturbed by the finished project.

Still, the second proposal was perhaps the most eco-conscious one presented. Jeff Warner, the head architect from WRNS Studio, presented the Bridge/Sustainability Institute plan for the futuristic museum and surrounding grounds. “This is going to be a living building,” Warner said in his presentation. “With such an unusual vantage point, we can see the interplay of wind and water and weather.”

The institute, designed by WRNS Studio and Sherwood Design Engineers, will have rooftop gardens, rotating exhibits, event space and a café and market. With 120,000 square feet of program space in the middle and two wings jutting out from it, the plan is to have the institute looking as if it is floating over the marsh while looking out into the bay.